September babies, lets roll out the red carpet because your birthstone deserves the royal treatment.

Did you know that ancient civilizations believed that the world was set upon an enormous sapphire, which painted the sky blue with its reflection?  This legend, as well as the belief that the ten commandments were inscribed upon tablets made of sapphire, gives September’s birthstone a royal place among gemstones.

Named after the Greek word “sapphirus”, meaning blue, Sapphires have been a long time favorite among priests and kings, who considered them symbolic of wisdom and purity. These gemstones are prominent among the British Crown Jewels, and Prince Charles chose this as the engagement ring for Princess Diana which is now being worn by Kate Middleton.

Sapphire is a variety of the mineral corundum.  Corundum is found in every color of the rainbow, with red being designated as ruby and all other hues Sapphire.  But the most prized color of Sapphire is a rich, deep blue.

The Sapphire is second only to the Diamond in hardness, making it a durable gemstone for setting into jewelry. 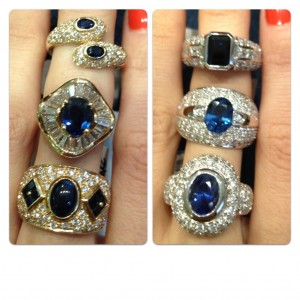 Do you prefer blue sapphires set in yellow gold or white gold?